Centers for Oral Care
www.AnimalDentistrySolutions.com
No. 11 -- 19Jan2017
A BLOG by DH DeForge, VMD
Fellow of the Academy of Veterinary Dentistry
1-800-838-3368
DonDeForge100@gmail.com and DoctorDeForge@yahoo.com

Introduction:
The classic treatment of feline Stomatitis with whole mouth extraction or extraction of the teeth distal to the canine teeth has proven to be non-productive.
Anywhere between 50-65% of these felines have only short term improvement with a return of the oral inflammatory condition in 6 to18 months.  On the other hand, the alternative surgery, herein described, utilizing Radiowave Radiosurgery to create full thickness mucoperiosteal flaps, combined with osseous surgery, and bone augmentation have proven to be completely successful.
Dr. Robert Wiggs, identified by many as the “Father of Modern Veterinary Dentistry” writes in Veterinary Dentistry Principles and Practice: Lippincott-Raven-1997 about the importance of Guided Tissue Regeneration.
“As advances in veterinary dentistry occur, new techniques and materials and being utilized to offer treatment for teeth with advancing periodontal lesions that previously would have been extracted.  Periodontal disease progresses in a cyclic manner of alternating periods of active destruction and dormancy, rather than being linearly continuous.   Many forms of periodontitis exist, each progressing to cause attachment loss at variable rates.  The actual cause of attachment loss is generally considered to include interactions of bacteria, their by-products, and the various components of the host immune system in response.  Periodontal pockets on the palatal aspect of the maxillary cuspids are easily overlooked, yet they are not an uncommon finding in the dog and when encountered have a strong probability of eventual oronasal fistula development.  While tooth extraction with appropriate flap closure addresses the problem, preservation of the tooth structure and resolution of the defect using regenerative therapeutic means represent a possible positive alternative.”
Dr. Wiggs continues:
“Ultimately, regeneration of the supporting tissues to attain a more normal and healthy anatomic and physiologic state may help in maintaining disease control. Guided Tissue Regeneration [GTR] in veterinary dentistry principally deals with the regeneration of periodontal tissue lost due to disease or injury.  Tissue regeneration has been demonstrated with alveolar bone, cementum, and periodontal ligament in specific therapies, locations, and type of materials. Bulk osseous replacement packing materials generally come in small natural particulate, granular, or spherical shapes available in non-absorbable and absorbable substances.”
From Dentistry.com-the following definitions from human dentistry might help explain the terms GTR and GBR.
Guided Tissue Regeneration (GTR)
Refers to procedures that attempt to regenerate lost periodontal structures, such as bone, periodontal ligament and the connective tissue attachment that support our teeth. This is accomplished using biocompatible membranes, often in combination with bone grafts or tissue stimulating proteins.
Guided Bone Regeneration (GBR)
Refers to procedures that attempt to regenerate bone prior to the placement of bridges or, more commonly, implants. This is accomplished using bone grafts and biocompatible membranes that keep out tissue and allow the bone to grow.
Also:
Bioactive glass materials such as PerioGlas (Biomaterials) or BioGran (Orthovita) are a form of glass particles upon which a layer of apatite forms, thus promoting bone formation. [ Wheeler DL, Stokes KE, Hoellrich RG, et al. Effect of bioactive glass particle size on osseous regeneration of cancellous defects. J Biomed Mater Res. 1998;41:527-533.].
In the Journal of Veterinary Dentistry, Vol 14, No. 4-Dec 1997-Evaluation of Bioglass®/PerioGlas™ [Consil®] Synthetic Bone Graft Particulate in the Dog and Cat-DH DeForge, VMD -GBR is described.  Bioglass® Synthetic Bone Graft Particulate [PerioGlas™/Consil™] was utilized to treat osseous periodontal defects, and in post-extraction sites to maintain the vertical height and width of the alveolar ridge.  The material is easy to use, inhibits epithelial down growth, and acts as a mechanical hemostatic agent.  Radiographic follow-up in 36 dogs and 5 cats demonstrated significant bone fill.  In the osseous periodontal defect treatment group, clinical probing depths deceased significantly, and there was an apparent gain in attachment level.  This synthetic bone graft particulate improves the rate of osseous growth while being resorbed and replaced with bone during the healing process.
This original work led to the utilization of Consil®/Bioglass®, synthetic bone graft particulate, in a feline stomatitis surgery technique developed by Dr. DH DeForge.  When implanted in stomatitis felines, a material surface reaction results in the formation of a calcium phosphate layer that is similar in composition and structure to the hydroxyapatite found in bone mineral.  This apatite layer provides the scaffolding onto which the patient’s new bone will grow allowing repair of the bone defects in feline oral stomatitis.  Diseased bone is removed and new bone is created to allow the patient to fully recover from the inflammation and pain caused by the pre-surgical oral pathology.
The hypothesis that the cats affected with stomatitis suffer from a bone disease rather than a dental disease has been confirmed by Dr. DeForge with this new surgical approach to the disease. The confirmation is the actualization of complete and permanent clinical improvement after Dr. DeForge’s GBR surgery in the edentulous patient [i.e. patients having had earlier whole mouth extraction surgery by other surgeons prior to referral to Dr. DeForge].   In these felines, where the whole mouth extraction technique had failed, GBR Feline Stomatitis Surgery succeeds confirming the origin of the pathology as a bone-centered pathology.
Before patients can be treated by Dr. DeForge with his surgery utilizing radiosurgery combined with GBR, a very comprehensive pre-anesthetic screening must be completed.  This screening includes clinical chemistry, serology, hematology, and special imaging to rule out other medical problems that might co-exist with stomatitis.  Feline Cardiomyopathy and Low Grade Lymphoma and Chronic Lymphocytic Leukemia [CLL] are problems that have been noted in felines referred to Dr. DeForge for his surgical treatment of stomatitis.

Cats with HC are examined by a cardiologist and pre-treated prior to surgery with cardiologist approval for anesthesia.  The Lymphoma patients and CLL patients are not candidates that will be helped with stomatitis surgery.  Other patients present with Feline Immunodeficiency Virus infection.  These patients are confirmed as true FIV + patients by Western Blot testing at the National Veterinary Lab.  The FIV+ patient can be treated with stomatitis surgery with the client realizing that the recovery period will be lengthy.

All cats undergoing this surgery are Feline Bartonella tested by the National Veterinary Laboratory.  Dr. William Hardy at the National Veterinary labs identifies a subset of Feline Bartonella positive felines with a stomatitis-like pathology, under a year of age, that respond very well to treatment with Azithromycin.
Feline Stomatitis cats over twelve months of age that are Feline Bartonella positive, as identified by Western Blot testing at Dr. Hardy’s laboratory, will not respond with Azithromycin.   They are still treated with Azithromycin prior to surgery because of the fact that Bartonella poses a zoonotic threat.  The older Feline Bartonella + positive feline with stomatitis will need GBR surgery to recover.  All patients that are presented for feline stomatitis surgery have biopsies to rule out oral cancer and confirm that they are truly oral stomatitis affected felines.
The following pictures are before and after pictures from two different patients who both had Dr. DeForge's Feline Stomatitis Radiowave Radiosurgery with GBR Parts I and II performed. Notice the significant decrease in inflammation and ulceration in the after photographs in comparison to the before photographs. 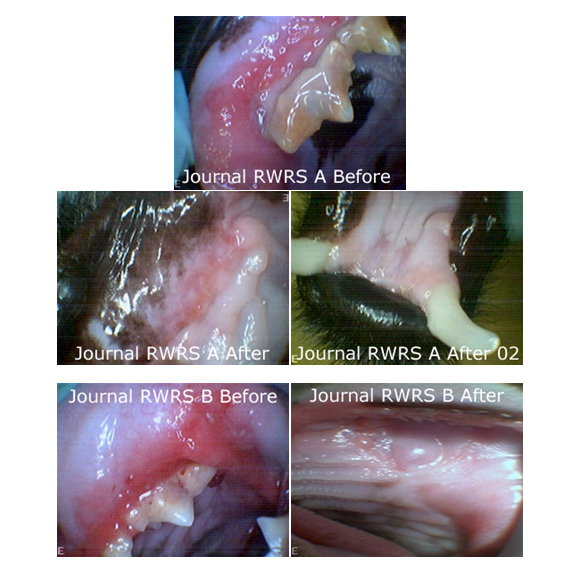 The photo gallery included in this report shows the improvement of patient’s after Dr. DeForge’s GBR surgery.  Questions about this surgery should be directed to Dr. DeForge at: DonDeForge100@gmail.com

Pulpitis in the Dog

#DrDonDeForge
In 1996, Dr. DeForge was honored as AAHA North East Practitioner of the Year He also received the Peter Emily Residents Award in Small Animal Dentistry. He is Editor of An Atlas of Veterinary Dental Radiology. Dr. DeForge as Adjunct at Northwestern Community College’s Veterinary Technology Program established the Department of Oral Radiology and Periodontology. As a Fellow of the Academy of Veterinary Dentistry, he has been honored by human dentistry. Dr. Jeffrey A. Sherman, DDS, Diplomate of the American Board of Oral Electrosurgery and Executive Director of the World Academy of Radiosurgery writes: “Your years of lecturing and writing on the subject of radiosurgery have not gone unnoticed! Dr. DeForge is the Oral Radiology Consultant for E-Vet Diagnostics. Dr. DeForge is the Immediate Past President of the Society for Veterinary Medical Ethics. He is the Oral Consultant at the Beardsley Zoo in Bridgeport, Ct. Dr. DeForge is acting Chair of The Global Veterinary Ethics Congress .